Drive Like Jehu is a rock ‘n’ roll band from San Diego, California consisting of guitarist and vocalist John Reis, drummer Mark Trombino, bassist Mike Kennedy, and vocalist and guitarist Rick Froberg. On August 31, 2014, they played a free show in San Diego’s Balboa Park, which was their first public performance in 19 years and has led them to play select festivals and club shows ever since.

They were originally only around for five years and that run, between 1990 and 1995, yielded two classic albums: 1991’s self-titled masterpiece and its stellar 1994 follow-up, Yank Crime. Merge Records also released a two-song single in 1992. Other than a compilation appearance, that was pretty much it.

But something about their sound—post-hardcore maybe, but definitely loud, fierce, emotive rock ‘n’ roll—and mysterious legacy has taken on mythological proportions among underground music aficionados. Where did they come from? How did they end up on a major label? What role did Reis’ band Rocket From the Crypt play in the fate of Drive Like Jehu? Why did they disappear in 1995 and why did it take them almost 20 years to contemplate a reunion? Now that they’re touring again, what does the future of the band look like?

Some of these questions will be answered here, right now. Featuring interviews with all four band members, as well as collaborators like Rob Crow, producer Donnell Cameron, and former Interscope A&R woman Anna Statman, this is the story of one of the greatest rock and roll bands that very few people seem to know anything about.

John Reis is a fantastic guitarist and songwriter based in San Diego California. Over the past 25 years he has played in remarkable and influential bands like Pitchfork, Rocket From the Crypt, Hot Snakes, Sultans, and the Night Marchers among others, and he also started a cool label called Swami Records. One of his most significant bands was Drive Like Jehu who stopped playing together shortly after releasing their second album, Yank Crime, in 1994. Earlier this week the band, including singer/guitarist Rick Froberg, bassist Mike Kennedy, and drummer Mark Trombino, announced they would be playing a single, free show at the Spreckels Organ Pavilion in San Diego’s Balboa Park on August 31, accompanied by civic organist Dr. Carol Williams. Here, John and I talk about making pancakes, the comings and goings of the sun, why Drive Like Jehu is getting back together to play a single show, collaborating with the Spreckels Pipe Organ, how his friend Dang is on the board of directors for the Spreckels Organ Pavilion, sonic energy and jamming with Godzilla, how organs fit into the music of Drive Like Jehu, trash cans, how this reunion show has nothing to do with any historical landmarks beyond this organ, how Drive Like Jehu never ever broke up, the circumstantial reasons why Drive Like Jehu stopped playing together, why John thinks of himself mostly as a guitar player, how people seemed more stoked about the band after they went away, how Drive Like Jehu started after Pitchfork stopped playing together, Mike Kennedy and Mark Trombino’s band Night Soil Man, getting Rick to play with John, Mike, and Mark, having a small fanbase, the forthcoming Drive Like Jehu/Megadeth Megatour, playing with the organ, when Drive Like Jehu will actually practice together for the first time in 20 years, five songs in 30 minutes, no one knows what’s going to happen at this show, “Louie Louie,” never say never, turning people on with an organ, documenting this one Drive Like Jehu show, what’s up with new Hot Snakes songs and shows, when Rocket From the Crypt played Riot Fest in Toronto, the Rick Froberg Hot Snakes challenge, the John Reis Hot Snakes challenge, a Drive Like Jehu medley, the songs “Bullet Train to Vegas,” “Luau,” “Do You Compute,” and “Caress,” and then it was time to turn it off. 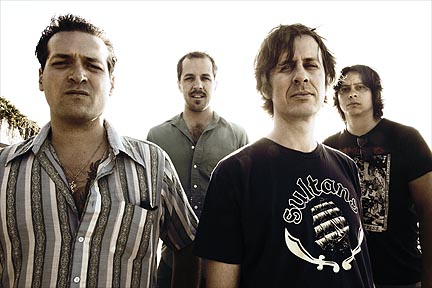 I spoke to Rick Froberg of Hot Snakes earlier today about the band’s upcoming reunion shows. Have a listen.